Book Review: Dare You To by Katie McGarry 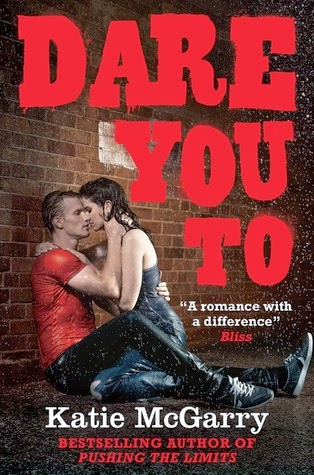 Ryan lowers his lips to my ear. "Dance with me, Beth."

"No." I whisper the reply. I hate him and I hate myself for wanting him to touch me again....

If anyone knew the truth about Beth Risk's home life, they'd send her mother to jail and seventeen-year-old Beth who knows where. So she protects her mom at all costs. Until the day her uncle swoops in and forces Beth to choose between her mom's freedom and her own happiness. That's how Beth finds herself living with an aunt who doesn't want her and going to a school that doesn't understand her. At all. Except for the one guy who shouldn't get her, but does....

Ryan Stone is the town golden boy, a popular baseball star jock-with secrets he can't tell anyone. Not even the friends he shares everything with, including the constant dares to do crazy things. The craziest? Asking out the Skater girl who couldn't be less interested in him.

But what begins as a dare becomes an intense attraction neither Ryan nor Beth expected. Suddenly, the boy with the flawless image risks his dreams-and his life-for the girl he loves, and the girl who won't let anyone get too close is daring herself to want it all.... [Via GoodReads]

My Thoughts:
I wasn't so keen on Pushing the Limits after I finished reading it. I felt that the characters where pushed into a characteristic that didn't really seem like them. There is a little of that in Dare You To as well but then I preferred this one way more!!

In Pushing the Limits, we saw Noah as the "bad boy" and Echo the "good girl" (on the outside), in Dare You To the roles have swapped. Sadly, I had the same issue with this book as the first. It's the swearing. I'm not anyone who gets offended by swearing, I don't mind if you swear or don't. I know people who swear like sailors but this book places them oddly. I find it difficult reading this book with the unnatural sounding "fuck" placed in Beth's speech. But luckily, it eased out and became more natural than forced.


This book is both heart-warming and heart-breaking. I loved the different issues that this book tackled and it was balanced so well. We have Beth, the rebellious girl who always looks after her mum, and to do so has to go stay with her uncle, which means leaving her mum and her friends. Then we have Ryan, who has a pushy father steering him in the direction of baseball, as well as the touchy topic of his brother. I don't know who's narration I liked more, because the characters where so complex.

Friendship, family and love. The letting go to go into the future, it's a real drive to what we have to do as an individual. My only second complaint is that I wanted to see more of Beth and Ryan, I was gutted when I got to the end of the book.

"My destiny was built for me before I sucked in my first breath."

I doubt the first book, but this has got me back on tracks. Definite recommend!!!
Posted by Sabrina Yam at 1/31/2014
Email ThisBlogThis!Share to TwitterShare to FacebookShare to Pinterest
Labels: Book Review, Contemporary, Dare You To, Katie McGarry, Young Adult