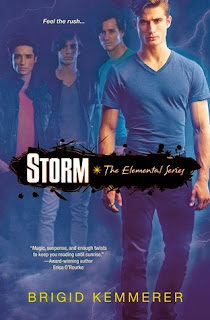 Earth, Fire, Air, Water – they have more power than you dream.


Ever since her ex-boyfriend spread those lies about her, Becca Chandler is suddenly getting all the guys—all the ones she doesn't want. Then she saves Chris Merrick from a beating in the school parking lot. Chris is different.Way different: he can control water—just like his brothers can control fire, wind, and earth. They’re powerful. Dangerous. Marked for death.

And now that she knows the truth, so is Becca.


Secrets are hard to keep when your life’s at stake. When Hunter, the mysterious new kid around school, turns up with a talent for being in the wrong place at the right time, Becca thinks she can trust him. But then Hunter goes head-to-head with Chris, and Becca wonders who’s hiding the most dangerous truth of all.

My Thoughts:
Not really sure about this book. I've heard so many raving reviews and I had really high expectations but they weren't fulfilled. Strangely, I found that there wasn't enough of the Merrick brothers - a bit odd since this series is about them! I didn't really like the duel POV (or it might of just been Becca.) Something in this book wasn't right.
Firstly, the balance of romance and action was all wrong. I didn't feel the spark between Becca and Chris, they just seemed to be friend-zoned all the way through and then just forced together. This book is about Chris but I couldn't help but prefer Nick more! The sarcastic and witty comments added a few points to Storm.

All the brother's took a stereotypical family role: protective one, rebel, etc. I didn't have a real issue with that. The scenes in the Merrick house were the ones I enjoyed the most. I really liked the ways that the brothers interacted and you could tell that they really cared about one another. Second favourite scene was when Becca had to go over to deliver the Tyler's message to Chris and she get's a little flustered by Gabriel who was at the top of the stairs sans-shirt.The humorous one liners keep this book floating but I'm not jumping up to grab the next book. I will be picking up the rest of the books in this series because I really want to know more about the other brothers - I just hope it gets better!

Should you read it? Meh, if you want to...
Posted by Sabrina Yam at 1/23/2014
Email ThisBlogThis!Share to TwitterShare to FacebookShare to Pinterest
Labels: Book Review, Bridget Kemmerer, Storm, Young Adult