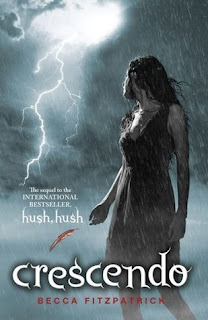 Still Nora's point of view, she is completely shocked by the sudden change in Patch and his new attraction. The "new attraction" is none other than her arch-enemy Marcie Millar! How could he?! As a consequence to Patch's actions, she creates these excuses to just rebel against...everything. Not only this, she starts hanging out with Scott Parnell, an old family friend who's moved back to town, even after after Patch's warnings.
But the more pressing issue is who murdered Nora's father? She finds herself questioning if her Nephilim bloodline could be a reason for his death and as she starts putting the pieces together by herself, she finds herself in more danger.
Thoughts:I have been meaning to pick up Crescendo for a while now. I borrowed Hush Hush from the library more than a year ago but I made myself swear that I'd buy it because I enjoyed it so much! Only this year did I go out and buy Hush Hush, Crescendo and Silence. I was so surprised how easily I managed to slip back into the series even after such a long break between reading the first book.
Unlike Hush Hush, I found that this book was mostly driven by the romance surrounding Nora and Patch. I would say a good chunk of the book revolves around Nora's confusion, frustration and loss on why Patch has suddenly had a change in interest. It almost becomes a game to Nora as she tries to rebel and show that she is able to take care of herself because he's ditched her.
The action side of the book was alright. Everything seemed a bit obvious compared to the last book and the clues are quite easy to pick up on. There is a smallish twist near the end, but it wasn't really enough for me. It needed a better action-romance balance, which I got from the first book but this just didn't give me that!!