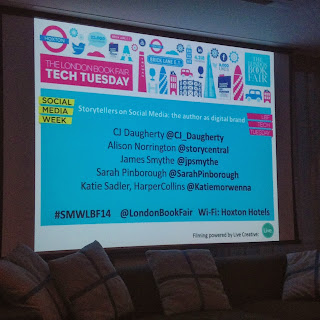 So, a while back now, on the 24th September, I attended the Storytellers on Social Media: The Author as a Digital Brand during the Social! It was so much fun and I've never experienced anything like this event!


I heard about the event from CJ Daugherty, who I previously met at another event (YA genre panel also w/ Holly Bourne and Alexia Casale), and she advertised it on her twitter.


Transmedia stroytelling: Storytelling across multiple forms of media, with each element making distinctive contributions to a user's understanding of the story universe, including where user actions affect the experience of content across multiple platforms


They went onto the discussion of how they present themselves on twitter. Commenting on that twitter allows you to be genuine and not self-promote all the time because people don’t want to be following someone who is constantly promoting. Sarah commented on how she takes the route of posting humorous tweets and, linking to the above quote, it’s about gaining not selling.


Arguments? Complaining? Twitter is so open that people can freely tweet an author about the book and their opinions. All agreed that although they would normally say something, they have to not follow through with people tweets.


After the talk, there was time to “mingle.” Having never tried to mingle before, I took an opportunity to give it ago after having a nice little discussion with two people seated near me before the talk started. Luckily, I had some idea of who to approach first, the evening host, Katie. As I want to pursue a career in publishing and this event was about the publishing world, I took the opportunity to ask as many questions about what publishers look for in candidates. She helpfully guided me to another woman who then guided me to another, until slowly I found myself “mingling!” In all my excitement, I was even more excited when I found out that I wasn’t the only student at the event!
I am SO hoping that I can get an opportunity to go to one of these events again!!
Posted by Sabrina Yam at 10/10/2013
Email ThisBlogThis!Share to TwitterShare to FacebookShare to Pinterest
Labels: Author, Brand, Digital, Media, Social, Social Media, Storytellers, Tech, Tuesday, Week