Are You Following the Allegiant?

﻿﻿﻿﻿Veronica Roth has given it to us now!

I feel like now seems like a great time to do a round off of what us Divergent fans have been given, so here we go...

We now have the title, the tag line and most importantly, the official book covers for the US and the UK! 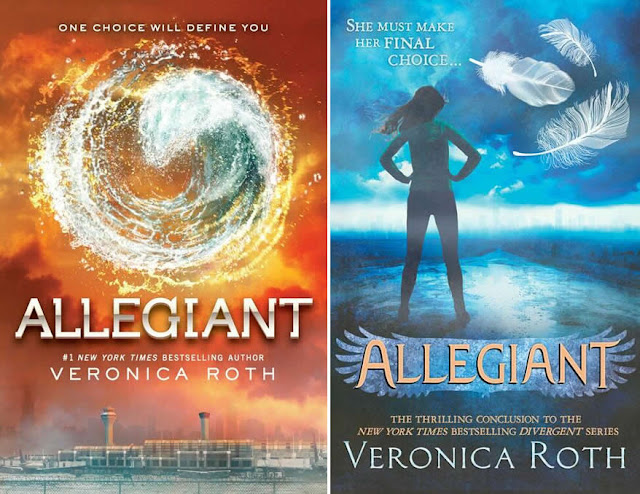 Personally, I don't like the UK cover as much as the US cover. But the UK covers as a collection stand nicely and especially because they are SO different from one another. The main reason why I like the US covers is because of the symbols, the Dauntless and then the Amity. But for the third one, what do you think? A wave? Which fraction do you think that could represent? It's definitely not obvious and up to our interpretation until Roth tells us so. But until then, we will all have to wait til October to get our hands on a physical copy of Allegiant. *sigh*

So many sites have been commenting on the bottom building on the American cover, it is in fact the Chicago airport!

Do you see the similarities too?

I think it's so funny how people have managed to figure out where the image of the building at the bottom, when it is a small minor of the cover. However it certainly does increase the hype of this book, because we all know that along with the airport on the cover the film is being filmed in Chicago, RIGHT NOW! (Yes, I am very excited over this fact)
﻿

While we're on the topic of Allegiant, I might as well go onto the film. Heard anything about it? I am surprised how quiet it has been. We have seen some sneaky images from the set and a few of them filming on location. But what about the cast? They have been very under wraps about this film and there are only 4 pictures of the cast around (as well as the very first video we saw of the cast) 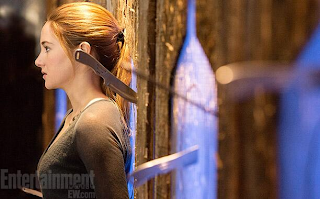 But we do have our movie still that has been out for a while. The knife scene! How could you not remember this scene? Showing Tris' selflessness in this scene in the book, there is also a whole other chapter on it but from Four's prospectus...we all got a bit too excited for that chapter ;) - all very good.  I was really surprised how quick we got a shot of the film, it was only a couple of days after they started!

Doubts about the movie still? Not pleased? You have nothing to fear (like what I did there). Veronica Roth has been visiting the set and on her visit said she saw the knife throwing scene, saying it is "very ture to the book."

If you missed her post on visiting the set make sure you check it out by pressing here! - She also talks about talking to the cast, what she was able to go round and see as well as the fact that Uriah is not going to be in Divergent! 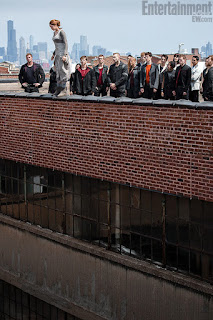 Literally seconds after posting this post what so happens to appear?! Nothing other than ANOTHER still from the film! (Click on the image for a larger version)

FIRST JUMPER! FIRST JUMPER! Wow, I love this picture, her costume, the other initiates and the building...the height! I feel a little sick because of the height, and this is only from a photo! So the feel I'm going to get when I'm watching it...Gosh, I can't wait...

But I must say, that I am a little disappointed that there is only Tris, yes, i know there are other people standing behind her but she is the focus. No Will, Al or Christina...or more importantly Four!

I am desperately hoping for a glimpse of any of those characters, or maybe a photo that doesn't have Tirs as the main focus, maybe her parents, Jeanine, Eric, Caleb? Just anyone? Who do you want to see in the next still?

Insurgent has now got a scriptor, Brian Duffield, looking forward to that...I don't think I need to add "if it gets picked up for the second film" because I have a feeling it will be picked up for all three films that it should be. But who knows, do you think it'll be four films at the rate of what Hollywood is doing to films nowadays?


Last final thing, make sure you check out some Divergent fansites, because I know some of them are flying off to have a tour of the set and talk to the cast of Divergent! You can send in your questions and they'll ask them personally for you! Have anything to ask our shining stars who are taking on our beloved roles of Tris and Four, Shailene Woodley and Theo James?

That's it for todays Divergent update!

I Am Selfish.
I Am Brave.

Until next time,
Sabrina