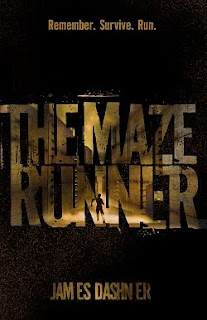 When Thomas wakes up in the lift, the only thing he can remember is his first name. His memory is blank. But he’s not alone. When the lift’s doors open, Thomas finds himself surrounded by kids who welcome him to the Glade—a large, open expanse surrounded by stone walls.

Just like Thomas, the Gladers don’t know why or how they got to the Glade. All they know is that every morning the stone doors to the maze that surrounds them have opened. Every night they’ve closed tight. And every 30 days a new boy has been delivered in the lift.

Thomas was expected. But the next day, a girl is sent up—the first girl to ever arrive in the Glade. And more surprising yet is the message she delivers.
Thomas might be more important than he could ever guess. If only he could unlock the dark secrets buried within his mind. [GoodReads]

My Thoughts:
This booked is packed with adventure and action. A mix between Gone by
Michael Grant and The Hunger Games by Suzanne Collins.

The main reason I love this book is the constant pace which also maintains the right amount of detail in every chapter. The first page is gripping and exciting as  Thomas finds himself in the Glade with no memory of his life before, only his name. The book is constantly following what he wants to do but this is what made the book such a page turner. As the newbie, Thomas isn't afraid and instantly jumps up to the most dangerous job. This part of the book, I found, was the most irritating as every so often he'd just keep saying "I need to be.." so-and-so "I will be..." so-and-so.

The description of everything around the maze was so well written and easy to imagine, which included all the characters. When we first read about the characters their is that instant feeling of a really close community (and not just because of the way the Glade is set out.) They don't break the rules and fear beyond the maze where Grievers roam when it goes dark and deadly. There are so many interesting twists with the characters around two thirds of the book (I think it's around there) which is actually mind blowing. I thought it's so clever and I would of never thought of it.

It was interesting and funny to read and get to know about the Glade. The main part of the enjoyment was to their language, but I couldn't help think that it was tied into some swear words...

There was one character which I found predictable. When we first met him in the story I knew that he was the character. It did twist a little but the outcome remained the same. Did you pick up that character, or was it just me?

Recommend or Not? Yes, definitely. Drop whatever your reading now and pick up THIS book!

What did you think of the book?
Posted by Sabrina Yam at 4/12/2012
Email ThisBlogThis!Share to TwitterShare to FacebookShare to Pinterest
Labels: Book Review, Dystopian, James Dashner, The Maze Runner