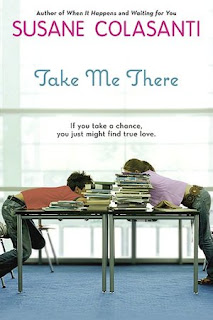 Summary:
Rhiannon is completely devastated after the breakup with her boyfriend. She wants him back.

Nicole's ex still wants to be with her, but she's obsessed with someone else.
James is hopelessly in love with Rhiannon, who doesn't see that their friendship can be so much more.
Will their desire to take a mean girl down a notch bring these three friends what they want . . . and more? [GoodReads]

My Thoughts:
I couldn't wait for my copy of "Take Me There" to arrive, after reading "When It Happens" and loving it. When I first picked up this book and started I thought it was a slow going book. I have to admit that I did put it down for a while as I felt that I wasn't "connecting" with it. However, when I did pick it back up I did enjoy it, I probably just wasn't in the mood for it.

Occasionally there were moments that were very slow going. Reason being that the three characters we follow are talking through each day but in their views which was sometimes repetitive.

Character-wise, all three of them took on different roles which did make the book interesting. Rhiannon as the desperate girl wanting the boy, James as the no one sees me that way boy and Nicole the cares for others and more private friend.

Although I enjoyed this book there was one factor which I felt was not needed in the story. For me I thought Nicole was like a spare wheel and her story seemed the smallest of problems as it didn't really relate to Rhiannon or James, whereas their problems did. "Three is a crowd" is normally what is said. But saying this, this book is based largely  on the friendship and as Rhiannon, Nicole and James are best friends I think that it is logical to have all of their points of views seen, as the main characters.

As well as covering friendship, it highlights the high school crushes and relationships. Rhiannon just having broken up and can't get over it and Nicole having a crush on someone who is not tolerable, which is something relatable to every girl.


The ending of the book was something bitter-sweet. Ending in close friendship, but so many things in the ending make you question everything. You will either like or dislike the ending. For me it's slightly dislike because I JUST WANT MORE!!  A sequel maybe? ;)

Recommend or Not? I would say yes, but sadly I would say that it's not one of the best books I've read of Susane Colasanti. If you know you can't read slow moving books, I think that this book won't be for you.


What did you think of the book?

Read more about this book on the author's website here
Posted by Sabrina Yam at 12/23/2011
Email ThisBlogThis!Share to TwitterShare to FacebookShare to Pinterest
Labels: Book Review, Susane Colasanti, Take Me There, USYA